Only three weeks separate North America from yet another home event. At the most recent International in Seattle, the Americans proved defend home soil against the Chinese invasion – now they’re looking for revenge. Two tickets for ESL One in the Theater at Madison Square Garden have already been taken and one remains – who’s it going to be?

The two teams going through the upper bracket and straight into the ESL One event are by no means a surprise. In the North American division, Evil Geniuses and Na.Vi US are at the top of the list, posting impressive results in pretty much all competitions they take part in. For Evil Geniuses especially this burden weighs heavy as they are the team with the most potential to defend their home turf.

In Seattle, the crowd support wasn’t quite enough to carry the blue team to victory against Vici Gaming, with the dream of a North American TI champion having been cut short once more. Since then a lot has changed in the world of Dota 2, but one constant remains – EG’s roster. No real changes occurred after they placed third at TI4 aside from the expected return of captain Fear. The veteran player suffered an injury and had to miss a whole host of tournaments prior to the big TI event. The long list of games missed by Fear includes appearances at DreamHack Summer, The Summit and ESL One Frankfurt. For some of these, Fear was present as a coach, while for others he didn’t travel. However, now he’s back with the team for good, and has taken up his old role once more.

In his first outings back in blue, the oldie of Dota looked shaky and rusty. However, now he’s back in shape. With him stand a savvy mix of standout players who showed the world that American Dota is not dead. Tournament success, great individual plays and team chemistry are all traits of Evil Geniuses with their captain and drafter PPD back at the helm.

How good the team truly is in comparison to the rest of North America was clearly visible in the ESL One NA qualifier. Not only did Evil Geniuses manhandle Thundercats! in the first round, but they also gave compLexity Gaming a beating. The first match between these two was reasonably close, with the coL newcomers giving it their all. However, the second then turned into an absolute annihilation. The match was not only a win that gave EG the title – it was also a win in a grudge match. Regardless of whether PPD felt the same, for Swindlemelonzz it was definitely a game of utmost importance. EG, having showed everyone who the boss is in North America, left coL to fight through the lower bracket for the final golden ticket. 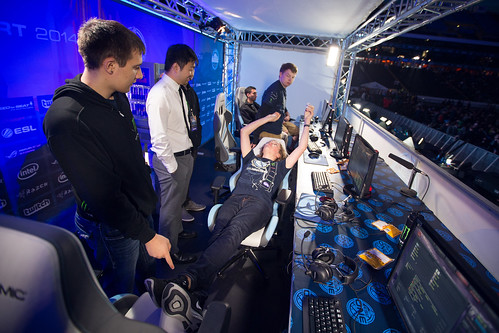 Traveling with EG is the North American branch of Natus Vincere. The squad, headed by captain Brax, is another perfect example of continuity in the North American scene, with their lineup having stayed put after TI. Unlike EG, Na’Vi.US didn’t exchange a single member, keeping the band together in the search for success.

A ticket to one of the biggest events of the new season is a good start to their quest, with the roster rolling through the qualifier. In the most decisive fashion possible, the North American heroes obliterated ROOT Gaming and destroyed Sneaky Nyx Assassins in the process. They are now heading to the Big Apple to not only represent their country and their continent, but also to fight for the top spot in North American Dota. The current rankings in the minds of a lot of fans see EG in front, Na’Vi.US second and a bunch of teams third. However, a good outing at ESL One might turn these predictions around.

EG and Na’Vi.US can already celebrate, pack their bags and plan their trip, but for four other teams, the race to New York City is still on, with these lower bracket hopefuls to enter a grueling battle until only one is left standing.

The battle royale that will ensue is going to kick off tonight when compLexity Gaming and Gerg Squad enter the arena. For compLexity, it will be all about getting up to play after the hype the EG series brought them. Now it’s time to get motivated and not let their utter destruction at the hands of EG get them down. The red-black brand had already shown flashes of brilliance in this tournament in their fight against Top5, so now it’s time to deliver against Gerg Squad.

For Gerg, the momentum might come in handy. While coL needs to get over a defeat, Gerg Squad are already motivated thanks to a previous win. In the first round of the lower bracket, the team defeated ROOT Gaming in a sweep, thus taking the first elimination game. Gerg Squad need two more of these if they want to make it to the Garden, first against compLexity and then potentially a rematch with SNA.

Before that can happen, however, SNA needs to make its way to the third round of the lower bracket. Standing in their way are Top5, who provided the only real close series in the tournament so far. Every other game ended in a straight 2-0 except Thundercats! versus Top5. In a long and tough battle, Top5 was able to finally put an end to their opponent’s resistance, edging out a close 2-1 victory to advance. For the Thundercats!, it was the end of the tournament, but for Top5 it was only the beginning. Who will be the last team standing?

To stay up to speed with the NA qualifier, be sure to check out joinDOTA’s stream. In order to get a full overview of the event, news and latest results, make sure to keep an eye on the official ESL One website.

To join EG, Na’Vi.US and the third North American team on their quest to defend home turf, pack your star-spangled banner and secure your seats today!

You can also take a look at our previous ESL One New York coverage below: