EMS One Katowice: LGB send the next favorite home

The last quarter final promised a lot of action, with LGB eSports having had a superb run during the group stage before achieving their spot. Facing them were DreamHack Winter champions Fnatic, who managed to struggle into the playoffs following a close losers’ match that ended in them exacting revenge on Reason Gaming. However, which team are to go against Virtus.pro in front of their fiercely loyal home crowd?

de_inferno: Starting the game as T, Fnatic won the pistol round and the two after before LGB took the upper hand, snatching the first round from Fnatic’s fingers. However, Fnatic retaliated, taking three more rounds to bring the score up to 6-2 – already a solid T score for them. LGB then pushed back, defending well and bringing the score to 7-6. schneider excelled in the following round, winning a one on five clutch and one more round before LGB finished the half leading 8-7. Fnatic once again took the pistol round, bringing the score up to 10-8 in their favour, only to have some stellar plays by olofm bring the game to an even scoreline of 10-10. Fnatic put up a solid defense and took the score all the way up to 14-10 before LGB was able to grab another round. However, this was merely a cosmetic change to the result, and Fnatic took home the map by a respectable 16-11.

de_mirage: LGB had a solid start, taking the pistol and two more besides, before Fnatic finally started picking up the pace, taking over the lead by 4-3 only to have olofm and his team take it back by 5-4. Fnatic had a hard time coming back from this, but after an excellent round evened the score to 5-5. After another two rounds of going back and forth, Fnatic seized the upper hand and secured the first half 9-6. With LGB taking the pistol round, it looked like they’d even out the map, but Fnatic only let them have one more round, extending their lead to 12-8 with another streak. A forced buy round for LGB swung the game back in their favour, with three more rounds going allowing them to take the lead. Even though Fnatic put up a good fight, LGB won all six key rounds in a row, bring the series to 1-1.​ 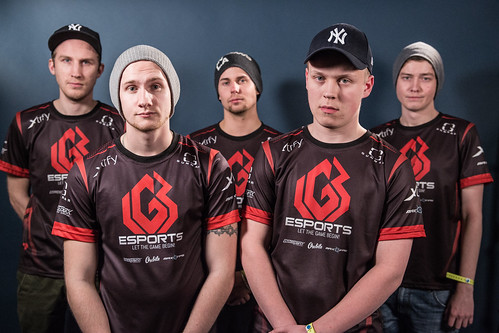 LGB during our shooting in Katowice (More photos on Flickr.com)

de_train: LGB got off to the perfect start with a quick plant, taking out one Fnatic player after another. After going 3-0, Fnatic once again took the fourth round, although LGB came back strong, taking the fourth and fifth T rounds even though their remaining players were all very low on health. A concerted push by Fnatic broke LGB’s streak, taking down the bomb and securing it to bring the score to 2-5 and the game to 5-5. With flusha and JW picking up the pace, LGB found it difficult to make Fnatic loosen their grip on the semifinals spot as the score reached 7-5. The score was an even 7-7 before Fnatic took the last round preceding the side switch.

With 7 rounds for LGB on the Terrorist side it looked like the DreamHack Winter champion might very well fall before the semifinals. Fnatic got off to a promising start by picking up the pistol round, but LGB managed to turn a one on one with some tactical bomb play, twist faking the defuse a few times without a kit while pronax waited for him to try an ambush. Fnatic’s fierce fighting spirit allowed them to extend their lead to 14-10 before another power defuse by LGB gave them back the upper hand, taking the match by 16-14 and closing the series by 2-1.

This last quarter final was about the perfect start of the day as both teams showed some superb plays and just CS as all fans want it to be. LGB advanced to the semi finals as Fnatic was not able to keep them under control. Especially the two big power defuses showed how much pressure was on the DreamHack Winter champion, while LGB lived up to what HeatoN was saying in between maps.

“LGB are strong. In Sweden, we are taking them seriously, and I’m sure they will be one of the teams being considered to be among the favorites winning the tournaments soon.”

Now they have a short break while the first semifinal between NiP and Dignitas is played before they are to take up arms against local heroes and Titan-killers Virtus.pro – can they beat them in the face of their home crowd?