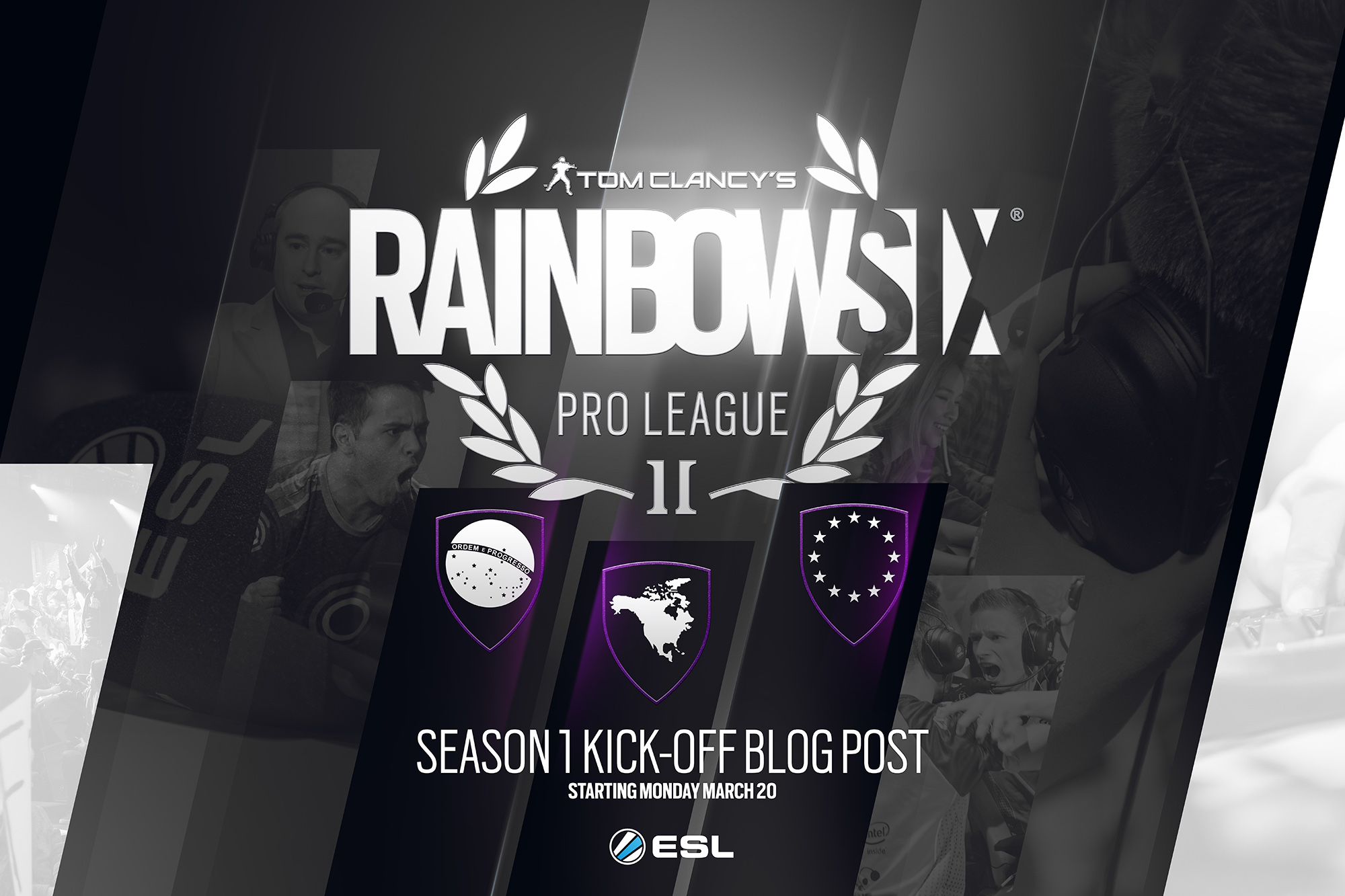 The final qualifiers for Year 2: Season 1 of the Rainbow Six: Siege Pro League took place last weekend. Over 24 teams across Europe, North America, and Brazil were battling to earn one of the ten coveted spots in the new format of the Pro League.

We can now reveal which teams will compete during the next two months to represent their territory during the Offline Finals. Which team will clinch the title of Pro League Champion at the ESL Studio in Katowice?

GiFu
The Finnish squad with a challenging name (it’s ‘SEE-SOO’ – apparently it has something to do with a candy’s font?) has been with us since the very beginning of the Rainbow Six Pro League. The team has never missed a single Pro League Final, and even though they might have changed some of their players, the core roster with Shatte, Bounssi & Willkey is now reinforced by newcomers Pannari and Kantoraketti.

Team Vitality
This French squad is new to the PC scene, consisting of experienced console players who made it to the Season 3 Finals in which they gave current World Champions, Continuum, a really tough matchup. Panix, Elemzje, and ENEMY will be joined by Risze and Revan, two seasoned players who have shown their skills on both the French and European scenes.

PENTA Sports
Season One Pro League champion PENTA Sports is back this season and hungry for redemption. Pengu is still part of this squad, accompanied by jOOnas, Fabian, DOKI and Goga. The team gathers some of the best European players but still must prove that they can return to the top of the European Pro League and get the title back.

Yunktis
The French squad Yunktis earned the title of Season Two Pro League champions and now they’re back with three of their champions holding the line. Sixquatre, Renshiro, and Joghurtzz are now joined by Liven and sTiZze to reclaim the title once again and show that they are the best in the world.

gBots
This Spanish squad has been a long-time contender in our major competitions. Calling on their experience, the team of DriD, Baroz, chOi, LioN and weskeRR went undefeated in the closed qualifiers. Seasoned and prepared, gBots are expected to work with surgical precision this entire season to get what they have sought since the first year: a spot in the Finals.

Playing Ducks
Z1ronic and meepeY were part of the team who made it to the Season 3 Finals and with the addition of Lacky, Renuilz and sno0ken, they managed to get the 2nd spot of the Closed Qualifier and with it, a seed in the Pro League. Playing Ducks will have to work their way up to the top three to get their tickets to the Pro League Finals.

E2 eSports
E2 is the first Russian team to grind their way up to the Pro League. While they have been around the Rainbow Six competitive scene for a while, they’ve reached a whole new level with their ascendance to the Pro League. As the sole representatives from the region, they must now bear the pride of all Eastern Europe on their shoulders.

Barrage eSport
Barrage is another name that has been well known on the Rainbow Six scene. As an organization, they have been present in the Rainbow Six community for a long time but this is their first foray as a PC Pro League team. As the last qualifier seed, TankNinjaz, Thomsen, Quantic, Jugger and p0lo will enter the Pro League as underdogs but whether or not their relative inexperience will lead to a fresh tactical approach remains to be seen.

Continuum
Continuum and its players have been part of the Rainbow Six Pro League from the very beginning and have been at the top level since the 3rd season. Led by Canadian, Continuum has demonstrated the usual competence of the NA scene, but doubled down with incredible intuition for strategy & counter-strat. They are the current Six Invitational World Champions.

eRa Eternity
The team fought their way to the grand finals of the Six Invitational and have proven themselves to be worthy adversaries and top competitors. Their line-up consists of many well-known and experienced players, including Kanine & Snake-Nade who have taken part in every Season Finals of the Rainbow Six Pro League.

FlipSid3 Tactics
Known for their consistency and longevity, Mint, Ezpz or Pojoman have brought their team to the podium every single season since the beginning of the Pro League. They will have to face an entirely new challenge this year as the competition has never been fiercer.

Onslaught
Previously known as Ferocity, Onslaught consists of experienced players such as Zed, Talon and Dalycan. Looking to build out the PC side of their organization, we can expect Onslaught to move aggressively to prove themselves under this new banner.

Ominous
The newly created Ominous organization is led by Jarvis who attended the Season 3 Pro League finals and gathered several accomplished players such as Bryan and BC. These past weeks, they have proven to be almost unbeatable, but it remains to be seen whether they are prepared for the jump from Go4 play to the brutality of Pro League competition.

Most Wanted
Even if the name rings a bell, Most Wanted’s line-up is 100% different from those who made it to the Season 3 Pro League Finals. However, do not make the mistake of taking them lightly – GurmyWormy & Foxa lead the team and are hoping to show the North American scene that they are serious and dedicated contenders.

Lethal Gaming
A mix of seasoned players and newcomers on the competitive scene, Check your Six, under the benevolent watch of GunHavoK will try to overthrow the favorites and take their spot on the podium of the North American Pro League.

ElevateGG
The last qualified team is well-known from their tenure as one of the dominant Xbox One teams. ElevateGG is your current Six Invitational World Champion on Xbox, and here they are on PC! LaxinG, England, Geometrics, Skys, and Neptunez looking to expand their list of accolades to include PC Pro League titles as well. Having played on the Xbox One for the entirety of Year 1 Pro League, you may see them as underdogs on the PC scene, but they’ve proven time and again that they have what it takes to win.

Santos Dexterity
Santos Dexterity has been among the best teams since the very beginning of the Rainbow Six Siege professional scene. The sole representative of Latin America in the Six Invitational is definitely determined to be the Pro League champion. Led by Silence and Gohan, Santos Dexterity exhibits the skill Latin American FPS players are known for, with an incredible talent for strategy and quick plays.

Keyd Stars
Keyd Stars is the newest organization to join the Rainbow Six Siege professional scene in Latin America. This winning squad consists of a mix of players from former INTZ and Santos Dexterity who together hold four 2016 regional championships between them. A team accustomed to playing finals they now put their proven skills and experience to the test in the Rainbow Six Pro League.

paiN Gaming
paiN Gaming is one of the most revered electronic sports organizations in Latin America. Led by skillful players Revoltz and Noted, paiN is committed to being in the Pro League Finals and will do their best to bring together the strongest team for the competition. With dedication and hard work, they’ve set their sights on becoming Rainbow Six Pro League Champions.

V3 Masters
V3 Masters is a united team with proven consistency throughout 2016 (having been in 3 out of 5 major finals in Latin America). Thy and his squad have demonstrated not only their advanced skills but also their ability to stay strong and resolute in the face of adversity.

BRK e-Sports
BRK e-Sports has only existed for 8 months, but includes three experienced players on their roster: Valv, Bor, and King. They are a versatile, unpredictable and fearless team that has much to prove this season. We can definitely expect exciting matches with BRK e-Sports.

Nox Gaming
Unbeaten in the qualifiers, Nox Gaming is confident and hungry to play against the best teams in the Rainbow Six Pro League. Revealed recently as devastating contenders in the Go4 Cups, this team knows that surprise could be their best weapon in the battle to come.

SemXorah Gaming
SemXorah is an organization with a popular history on the Brazilian FPS scene that has built a strong team composed of veteran Siege players. After a thrilling match against Uranus Gaming to secure their spot in Pro League, they are now the underdogs and seem to have the fans on their side as they move onto the big stage.

All streams will be broadcasted on the official Twitch Channel, as well as the official YouTube Channel. Tune in at the following times to cheer for your favorite team: